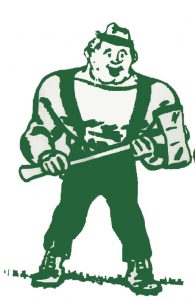 The present day organization known as Orofino Celebrations Inc., OCI, was first thought of in 1946. Vernon Butler and Jake Arfsten are credited with sending a letter, in 1947, to the organizations within Orofino. The letters were sent stating that an organization was being formed that would help in making a bigger and better county fair.

A committee drew up by-laws and a constitution and officers were elected. The first officers were President-J.B. “Buzz” Oud, Vice President-Melvin Snook, Treasurer-Vernon Butler and Secretary-Wayne Shriver.

It was decided to have a three day celebration of parades, concessions, games, contests and publicity to promote the town of Orofino and the county of Clearwater. Money was generated by donations from businessmen, firms and logging men.

The activities held that first year were a big parade, a knot hole derby (race for boys driving cars they built themselves from wood and scraps), a model airplane contest, kid’s parade, fiddler’s contest and a lumberjack show.

The Lumberjack Show was started with the idea of furthering our lumbering industry and way of life, along with that of farming. This was going to be carried out by contests that showed the arts and skills of the logger, especially those skills that were dying out due to mechanization. Melvin Snook engineered Lumberjack Day by setting up skills of chopping, bucking and using the peavey, axe and brawn.

On Sept. 28, 1947, the first Lumberjack Day was held with approximately 4,000 people watching the events of chopping, bucking, two man sawing and a team pulling contest. It was a huge success and changed the county fair as it had been. Orofino Celebrations received thanks and public commendation from the Clearwater County Fair Board Chairman W.C. Peace and County Agent Bruce Brooks, for “making the fair”, and it was hoped that the old fashioned fair would remain with more local color and atmosphere added.

Thus the organization and the idea was born and has been continued for 59 years with many changes being made along the way, but the general idea of promoting the forest industry and the loggers’ way of life is still upheld.

Sorry, no records were found. Please adjust your search criteria and try again.